In 1999, I completed my PhD thesis--a critical edition of a 13th century Dominican basic theology text by Simon de Hinton known from its incipit (first words) as Ad instructionem iuniorem (For the Instruction of juniors)  It is thought that this text was originally used by Dominicans looking to obtain their license to preach.  The contents focus on practical theology regarding the Credo, the Lord's Prayer, the Sacraments, the Beatitudes, the Virtues, the Gifts of the Holy Spirit, and the Vices.  The manuscript had a remarkably long life, circulating until into the 16th century and even being printed (in a somewhat mutated version) in the early 18th century.  There are 56 extant manuscripts, and during its life the text seemed to have evolved away from a text with a specific purpose to a more general one as sort of a quick guide to practical theology. Later copies become increasingly ideosyncratic. My PhD work focused on creating a critical edition--in this case, an attempt to establish what the original most likely looked like--based on four of the thirty manuscripts I viewed.

When one completes one's PhD work, a bound copy is prepared for the archives of the university granting the degree.  It was in ordering this copy that I first had the idea:  I had, essentially, produced the 57th copy of this work.  Wouldn't it be wonderful to produce that copy in a truly medieval manner--copied by hand, as a 13th century scholar or stationer might have done?

The proposal that was accepted was to copy the Ad instructionem iuniorem by hand.  The bulk of the work would be done using modern substitutes for period materials -- pergamenata, Windsor and Newton India ink, and metal Brause nibs.  However, the opening gathering would then be recopied onto manuscript vellum using hand cut quills and oak gall ink (both made by me).  The original plan was that the book would be bound with a limp binding.

I completed the copying of the text in May, 2016 and was now ready for binding.

It was now mid-May, and I had several months left to complete the project.  I had arranged an exchange with Mistress Lucrece to provide her some calligraphed pages on vellum for her to use as spine supports in her own bookbinding project, and in exchange she had offered to help me prepare book boards for my own project. This had led me away from the idea of limp binding towards hard binding.  Since I had only ever done one bookbinding project (and it was part of a "quick and easy" workshop, not a full-fledged project), I figured I would keep it simple and just use a "period-esque" binding.  Mistress Tarian gave me a day-long bookbinding tutorial and sent me away with a copy of JA Szirmai's Archaeology of Medieval Bookbinding.  This being a 13th century book, the proper binding style would actually be Romanesque.  Soon I found myself going down the rabbit hole of doing the type of binding that was actually correct for my book for my first full-scale bookbinding project. (Project managers refer to this as "scope creep.")

Szirmai's book indicated the correct thickness for Romanesque book boards was 7-17 mm, with the most common being 10 and 12 mm[1].  Oak was by far the most common wood used in Romanesque bookbinding.  Maitresse Lucrece helped me plane a quarter-sawn oak board down to 10 mm.
I also determined that tunnels should be cut in the book boards to about 15 mm out from the spine for the cords, which would then emerge and run another few centimetres before being pegged.[2] End tapes were done over thinner cords, which were tunneled into back-sawn corners, which according to Szirmai were a “distinctive feature” of Romanesque bookbinding.[3]  Oak being hard and my experience with woodworking being nonexistent, I used a Dremel tool to cut the channels and a drill to cut the holes.

The paper used for all but the first gathering is Fabriano Pergamon in the 230 g/m2 weight (the heaviest weight).  The first gathering is genuine vellum obtained from the Guild of Limners.  In all cases the paper/vellum was cut down from larger pieces.  The size of the book was dictated by the size of the large pieces of genuine vellum, as all four sheets were cut from the original large sheet.
Sewing the book

Szirmai indicates that the sewing frame likely made its appearance during the Romanesque period, as it first appears in a 12th century illumination.[4] My sewing frame is not unlike the one depicted in that illumination.
Per Szirmai, the Romanesque style “invariably used thongs of white-tawed leather” as sewing supports; these were up to 5 mm thick, 8-20 mm wide, and split down the middle. [5] Lucrece was able to give me some alum-tawed cords for the sewing supports that fit these parameters, which I then cut down the middle.

I chose to use four sewing stations for my book, which according to Szirmai is found in 21.7% of books from this period.[6]

Sewing the book was done with thread from hand processed and handspun linen acquired from THL Anne of Saffron Walden.  The thread was very lightly waxed. Sewing holes were done using an awl.[7]  The aforementioned alum cords, split in the spine area, were attached using herringbone stitch[8]. End tapes were done using silk thread over a thinner cord, attached to each gathering. 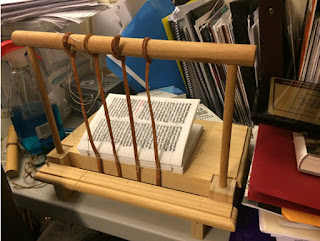 The book on the sewing frame. 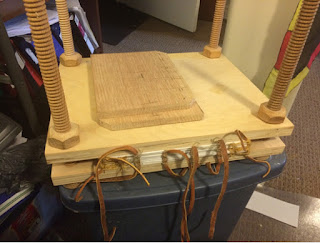 The book in the book press after sewing.  The two oak book boards have been backsawn and await their tunnels for the cords. 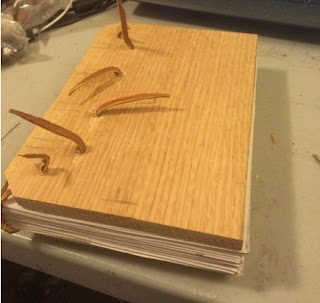 Lacing in the book boards 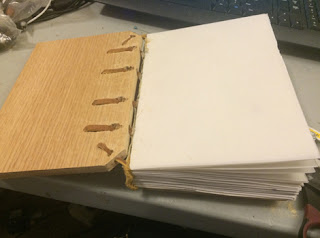 The book opened to show the lacing into the spine and along the channels.

Trimming the pages was a challenge, as the vegetable parchment paper proved very difficult to cut in a block.  I ended up completing the trimming using small scissors. In retrospect, examining the photos included in Szirmai, it is quite possible and even probable that book blocks during this period were not actually trimmed, and so the relatively uneven pages of my book are likely more typical of books of this period.

The final step was to cover the book with leather. Extant Romanesque books are generally bound in tan or brown leather, but Szirmai provides evidence of bindings done in different coloured leathers, including a 1369 inventory of the papal library in Avignon that indicates the use of other colours, including 28% in red leather.[10] I very definitely wanted my book to be bound in red leather. The leather I purchased was too thick for my purposes, so I shaved it down with a sharp blade (and eventually, a Dremel tool.  The leather was then attached using wheat paste.

The final piece accomplishes the goal of producing a book that feels in keeping with the manuscripts I examined over 20 years ago.  It makes a worthy 57th manuscript copy of this work, and I can finally say I have a bound copy of my thesis text.

A few lessons learned during this project include:
I selected the heaviest grade of vegetable parchment for this project.  While this is by far the preferred grade for single-sheet scrolls, for a book I would have been better served to use the thinnest grade possible. The heaviness of the paper made it difficult to get the folded gatherings to lay flat, even after time in the bookpress to flatten them.  This also led to some looseness in the binding itself, which is particularly prominent at the front and back of the book due to the single-sheet endpieces. However, the use oak bookboards helped counteract the thickness at the spine.

In retrospect, as mentioned above, I would not have attempted to trim the pages once they were initially cut.

I made one error in cutting the leather binding, slicing too deeply to wrap the leather around the spine area.  This was purely due to inexperience in binding books. 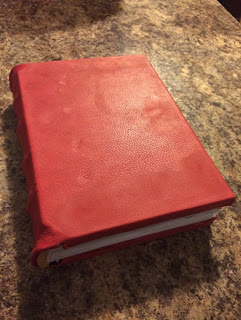 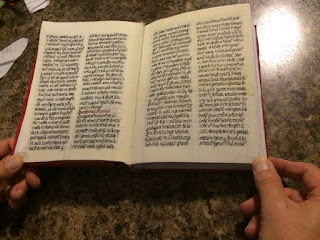