I have been fletching my own arrows for several years. Up until recently, I had not attempted to give my arrows a more authentic look and feel. However, the acquisition of a hickory traditional longbow and the desire to participate in the period archery shoot at Pennsic, in which all equipment must be as authentic as possible, spurred a project to create a set of more authentic-style arrows.
Shafts
According to Roger Ascham in Toxophilus or The Schole of Shooting, dated to 1545, the best woods for arrows include birch, hardbearm, oak, and ash.

He also states that the wood should be well seasoned and must be “as the grain lyeth” or it will not fly cleanly.[2] Actual shafts from the war arrows found on the Mary Rose were constructed of a number of hardwoods, with aspen (despite Ascham’s dismissal of it as too light) and poplar being most common.[3]  Lengths generally ranged from 29”-31” in length, which may sound relatively short until one realizes these were used with bows that might well have a draw weight of over 100 lbs.  Diameter of these arrows could range from 1/2" to 3/8” and were often significantly tapered from nock to shoulder.

Arrows from the Mary Rose, as found and modern replicas.   From the Mary Rose museum website, http://www.maryrose.org/meet-the-crew/soldiers-and-gunners/archery/
In comparison, my longbow has a draw weight of 35 lbs and I generally use 5/16” shafting.  The shafts of these arrows are commercially manufactured of Port Orford cedar.  The shafts were sealed with two coats of tung oil.

Nocks
Nocks were cut into the shafts of medieval arrows perpendicular to the grain of the arrow. Earlier arrows tended to have “bulbous” nocks that is, the wood was cut thicker at the nock end, forming a “bulb” that strengthened the nock. (This shape is actually approximated by some modern plastic glue on-nocks).  Ascham has this to say regarding nocks:

The nocke of the shafte is dyuersly made, for some be greate and full, some hansome and lytle, some wyde, some narow, some depe, some shalowe, some round, some longe, some wyth one nocke, fome wyth a double nocke, wherof euery one hathe hys propertye. The greate and full nocke, maye be well felte, and many wayes they saue a shafte from brekynge. The hansome and lytle nocke wyll go clene awaye frome the hand, the wyde nocke is noughte, both for breakyng of the shafte and also for soden slyppynge oute of the slrynge when the narrowe nocke doth auoyde bothe those harmes. The depe and longe nocke is good in warre for sure kepyng in of the strynge. The fhalow, and rownde nocke is best for our purpose in prickyng for cleane delyueraunce of a shoote.[4]

Later English arrows seem to have had reinforced nocks rather than bulbous ones. The bows used with warbow arrows would have exerted a great deal of stress on the nocks of the shafts.  It is not surprising, therefore, to learn that the nocks were reinforced, typically with horn placed perpendicular to the nock (and therefore, along the grain.)[5]
Westminster Abbey houses a single surviving medieval arrow shaft, 3/8” in diameter, dated to the 15th century. This shaft has a horn nock insert.

My nocks are a compromise. As my shafts were pre-cut, a bulbous nock was not possible.  Since this was my first attempt at period-style arrows, and because these arrows are designed to be shot from a 35# bow and so would likely not put a great deal of strain on the nock area,  I chose not to add a horn insert.  I did, however, use thread to reinforce the nock area.  The nock was cut by hand using a pair of hacksaw blades taped together. The cut was then filed using sandpaper.  The depth of the cut was designed to be comparable to the depth on my modern arrow nocks. I tested the width of the nocks using my strung bow to ensure they were not either too tight or too loose on the string.
Fletching
The Mary Rose arrows had a fletch length of around 7 3/8” and were likely made of goose feathers in a triangular cut; it’s estimated that 5/8” may have been a likely height.[6]  Some have postulated that the relatively long length of the feathers as compared to modern arrows may have been due to a need to stabilize the arrow due the weight of the shaft and the arrowhead.[7]  Ascham discusses fletching in some detail, mentioning the preference for goose feathers, and the difference the age of the goose and which part of the wing the feathers are taken from makes to the arrow:

Nowe sir ye haue hearde howe a fether must be had, and that a goofe fether onely. It foloweth of a yong gose and an oulde, and the residue belonging to a fether : which thing I wyll shortlye courfe ouer : wherof, when you knowe the properties, you maye fitte your shaftes accordyng to your shotyng, which rule you must obserue in all other thynges too, bycause no one fashion or quantitie can be fitte for euery man, no more than a shooe or a cote can be. The oulde goose fether is styffe and stronge, good for a wynde, and fytteft for a deed shaft : the yonge goose fether is weake and fyne, best for a swyfte shaft, and it must be couled at the first shering, somewhat hye, for with shoting, it wyll fattle and faule very moche. The same thing (although not so moche) is to be confydered in a goose and a gander. A fenny goofe, euen as her flefh is blacker, floorer, vnholfomer, fo is her fether for the fame caufe courier floorer and rougher, and therfore I haue heard very good fletchers saye, that the seconde fether in some place is better then the pinion in other some. Betwixt the winges is lytle difference, but that you must haue diuerse shaftes of one flight, fethered with diuerse winges, for diuerse windes: for if the wynde and the fether go both one way the shaft wyll be caryed to moche. The pinion fethers as it hath the firste place in the winge, so it hath the fyrst place in good fetheringe. You maye knowe it afore it be pared, by a bought whiche is in it, and agayne when it is colde, by the thinnsse aboue, and the thicknesse at the grounde, and also by the stifnes and finesse which wyll cary a stiaft better, faster and further, euen as a fine sayle cloth doth a shyppe.[8]

Ascham also mentions that the length of the feather should match the type and weight of the shaft:

The lengthe and shortneffe of the fether, serueth for diuers shaftes, as a long fether for a long heauy, or byg shafte, the shorte fether for the contrary. Agayne the shorte may stande farther, the longe nerer the nocke. Youre fether muste stande almooste streyght on, but yet after that forte, yat it maye turne rounde in flyinge.[9]

Although most replica Mary Rose arrows are done with a single colour of feather, Ascham points out that the practice of having a different coloured cock feather on a three-fletched arrow was known:

The coulour of the fether is lefte to be regarded, yet fommewhat to be looked on : for a good whyte, you haue fometyme an yll greye. Yet furelye it ftandeth with good reafon to haue the cocke fether black or greye, as it were to gyue a man warning to nocke ryght. The corke fether is called that which ftandeth aboue in ryght nocking, which if you do not obferue the other fethers mufl nedes run on thebowe, and fo marre your fhote.[10]

Feathers were generally tied on with silk or linen thread; those on the Mary Rose had at least 4 turns per inch.[11]  A combination of beeswax and animal fat seems to have been used to attach the fletching; wax was used to seal on the threads.[12]  One maker of reproduction arrows has suggested that hide glue may have been used to attach the feathers and the wax and tallow combination used as waterproofing.[13]  Traces of a verdigris compound have also been found in the area of the fletching, which may have been used as both further waterproofing and to protect the arrows from insects and fungus.[14] This accounts for the greenish colour seen on the set of Mary Rose arrows in the photograph above. 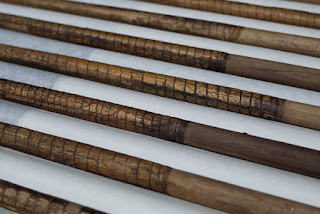 Closeup of some Mary Rose arrows undergoing conservation, from https://www.flickr.com/photos/bokononist/15213836305
My feathers are 4” in length and approximately 1/2" at their highest point. They were hand-cut from commercially-available full length feathers. I made two sets of seven—one set using black feathers, one set using white.  I used a fletching jig to properly position my feathers; they are straight-set, glued in place, and then tied on using linen thread at approximately 5 turns per inch. I have used wax as a sealant over the reinforcing ties at both ends of the fletching.
Arrowheads

The most common types of arrowheads can be seen in the page from Catherine of Cleves’ book of hours depicting archery equipment:  A broadhead, “arrow”-shaped head, and a finer bodkin point.[15] 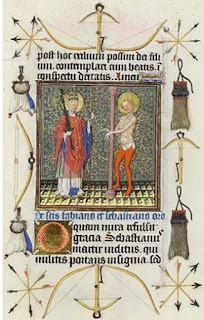 The illumination from the Luttrell Psalter shows archers practicing at butts using this latter type of arrowhead, just as today’s SCA archers use field points.

“The one….hauyng two poyntes or barbes, lookyng backewarde to the stele and the fethers, which surely we call in Englime a brode arrowe head or a swalowe tayle. The other …hauing. ii. poyntes stretchyng forwarde, and this Englysh men do call a forkehead: bothe these two kyndes of heades, were vsed in Homers dayes, for Teucer vsed forked heades, fayinge thus to Agamemnon.”

Ascham then goes on to note, regarding bodkin points:

Our Englyshe heades be better in war than eyther forked heades, or brode arrowe heades. For firste the ende beynge lyghter they flee a great deele the faster, and by the same reason gyueth a far sorer stripe. Yea and I suppose if ye fame lytle barbes whiche they haue, were clene put away, they fhuld be far better.[16]

The illustration below shows a variety of arrowhead types as classified by the Museum of London.  Type 16 is thought to have been one of the more common types for warbows; types 10 and 11 are “bodkin”-type heads. 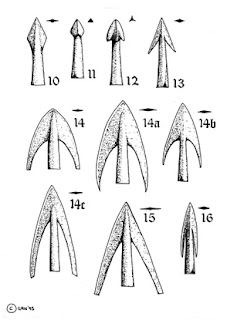 My arrows use commercially available field points. Reproduction bodkin tips are available (and I have included a sample arrow with one of these for comparison), but I have not yet found them for 5/16” shafts.  These arrows were meant for (and have been used for) actual shooting, not for show, and if I lose one of these tips in a butt I will not feel the need to tear it apart to retrieve a valuable arrowhead.  Analysis of the arrows found on the Mary Rose show that “an organic substance, most probably a fish-based glue” were used to attach the points.[17] I used modern Fletch-Tite glue.
Lessons Learned and Next Steps
These arrows have held up well for actual shooting. Initially the fletch ties were not protected with glue, but this was added later when some of the ties came loose.  The nocks show no signs of stress.
For future projects I would like to explore the following:
Use of horn inserts for the nocks
Silk fletch ties (to compare them to the linen that was used in this project)
Longer feathers, perhaps eventually sheared and prepared from whole goose feathers
Use of hide or fish glues rather than modern adhesives.
Experimentation with wood shafts of a different material (if I can obtain such shafts, as I lack the equipment and skill to make them myself)