In 1999, I completed my PhD thesis--a critical edition of a 13th century Dominican basic theology text by Simon de Hinton known from its incipit (first words) as Ad instructionem iuniorem (For the Instruction of juniors)  It is thought that this text was originally used by Dominicans looking to obtain their license to preach.  The contents focus on practical theology regarding the Credo, the Lord's Prayer, the Sacraments, the Beatitudes, the Virtues, the Gifts of the Holy Spirit, and the Vices.  The manuscript had a remarkably long life, circulating until into the 16th century and even being printed (in a somewhat mutated version) in the early 18th century.  There are 56 extant manuscripts, and during its life the text seemed to have evolved away from a text with a specific purpose to a more general one as sort of a quick guide to practical theology. Later copies become increasingly ideosyncratic. My PhD work focused on creating a critical edition--in this case, an attempt to establish what the original most likely looked like--based on four of the thirty manuscripts I viewed.
When one completes one's PhD work, a bound copy is prepared for the archives of the university granting the degree.  It was in ordering this copy that I first had the idea:  I had, essentially, produced the 57th copy of this work.  Wouldn't it be wonderful to produce that copy in a truly medieval manner--copied by hand, as a 13th century scholar or stationer might have done?

The proposal that was accepted was to copy the Ad instructionem iuniorem by hand.  The bulk of the work would be done using modern substitutes for period materials – vegetable parchment paper (Fabriano Pergamon), Windsor and Newton India ink, and metal Brause nibs.  However, the opening gathering would then be recopied onto manuscript vellum using hand cut quills and oak gall ink (both made by me).  The final book would be bound with a limp binding.

I wanted this manuscript to replicate the look on the page of a 13th century scholarly text.  These books were meant for regular use by students, rather than as luxury items.  Therefore, the illumination in these books is normally minimal, and the text itself is often highly abbreviated to both save on costs and time needed to produce such a manuscript.  While I did not have any images of the manuscripts I had originally viewed during my initial research over 20 years ago, I did have access (thanks to the British Library) to similar theological treatises.  The two-column layout I selected for the work is typical of these books in the 13th century. 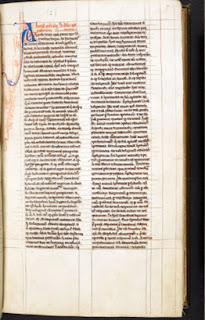 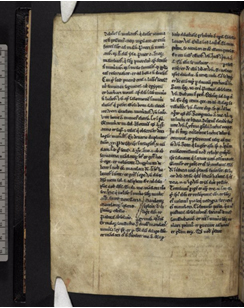 These texts also often have memory aids that break down topics in the text into a series of points (think of it as medieval PowerPoint presentations).  These were also used in the original texts I viewed (and copied by me when originally transcribed the manuscripts).  Here is an example of how one of these appeared in Harley MS524: 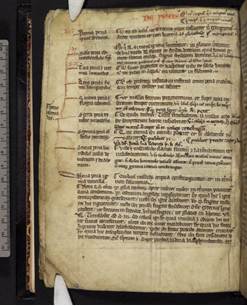 Layout guide lines, many of which can be still seen in the extant examples, were done in pencil for this project as opposed to the lead or silverpoint that would have been used in period.

As you can see, the script used is a Gothic book script (textualis) of a lower grade, termed rotunda by Michelle P. Brown: “The grade of the script is determined by the treatment of the bottom of the minims, which lack formally applied feet and are simply rounded off with a natural upwards curve of the pen.”[2]  The script used during this project is my own Gothic textualis rotunda hand.

The process of copying began in late December, 2015 and concluded in early April, 2016.  Here is my first page, in progress, with a contemporary work (with the large M) for comparison of the layout. 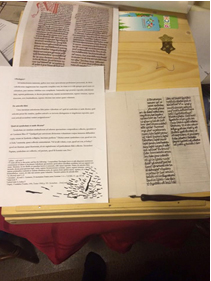 Once I gained momentum and became more confortable with copying large amounts of text (including not clamping down on the pen), it took me 35-45 minutes to copy one page of text.   I took the copying project with me to a variety of venues, including events and meetings.

As I progressed and became familiar with the abbreviations, the number of abbreviations used definitely increased.  (This would become clear when I came back to recopy the first gathering--which ended up being significantly shorter than the first iteration).  I am including an article I wrote on medieval sigla to show some of the most important types of abbreviations used in the work. 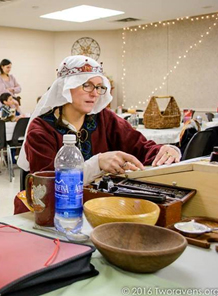 I made two major mistakes during the copying process.  The second, in which I copied an entire gathering out of order, was redone (and the miscopied gathering eventually bound in the back of the book).

There were seven figures in the work.  Most of them were in a sort of "flow chart" format.  These were done with a crow's quill pen. 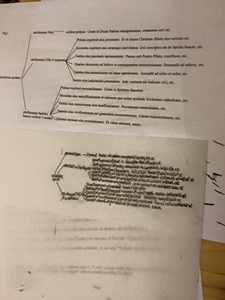 Once I had completed the initial copy, I took a break from pen and ink to work on pen and ink.  I received a quill cutting tutorial from Baroness Marioun Golightly, and produced three usable quill pens.  I also experimented with oak gall ink made by Ian the Green, Guild of Limners, and Dame Marguerite Gringraix before finally making my own ink, using a kit and recipe obtained from Guild Mirandola. Oak galls were hand ground by me for the project.
I found using the quills and oak gall ink surprisingly straightforward.  The pen had to be dipped more frequently, but the ink was less susceptible to coming out in huge blots. 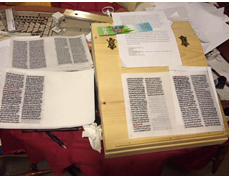 The project in progress. 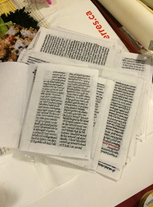 The pile of completed gatherings.

Once complete, the manuscript copy was 126 pages in length.  I added in some simple decorated capitals in red and blue (similar to the example from Harley MS 3244, f19r above)
I had also retained the first gathering of 14 pages (one blank page front and back and 14 with text) that I had recopied on the vellum, as well as a second gathering of 16 pages where the pages were out of sequence and had to be recopied. Since these were all aesthetically acceptable, I ended up binding them into the back of the book.

Ink making:  This was my first batch of oak gall ink.  For future batches, I would like to work to get the ink slightly thicker.

I would also like to experiment with a period ink recipe that would work on vegetable parchment. Oak gall ink tends to stay greyish rather than developing to the darker brown/black seen on real vellum.

Decorated capitals:  I need to practice the flourishes on these capitals more, and use ink rather than paint.

[1] All images are from the British Library Catalogue of Illuminated Manuscripts,  https://www.bl.uk/catalogues/illuminatedmanuscripts/welcome.htm
[2] Michelle Brown, A Guide to Western Historical Scripts from Antiquity to 1600, p.88.
Posted by Todd H. C. Fischer at 15:21