Ever wondered about that funky initial on your award scroll? Bought knotwork trim or admired the gripping beast on someone’s brooch? These design elements play a key role in possibly the world’s most beautiful book: the Lindisfarne Gospels.

The Lindisfarne Gospels is a very well preserved work assembled in the early 8th century. Containing the Gospels of Apostles Matthew, Mark, Luke and John from the New Testament, its design, materials, techniques and skill in execution are of the highest quality and represent certain technological advances, such as potentially the first example of a leadpoint (pencil).

Barely touched by the past 1300 years, the Lindisfarne Gospels is chiefly known for the very intricate illuminations found on a handful of its pages (cross-carpet and incipit pages introducing each of the four apostolic Gospels, as well as portraits of each apostle). Selected images from the Gospels can be seen at the British Library site, “Turning the Pages”, at http://www.bl.uk/onlinegallery/sacredtexts/ttpbooks.html

The demanding knotwork in these illuminations has strong parallels with earlier and contemporary metal- and stonework, such as the brooch, the Ardagh chalice, the Sutton Hoo treasures, carved early Irish high crosses and Pictish sculptures and metalwork.

Intended to be a display or “treasure book”, the Gospels form part of a body of books known as “Insular manuscripts” – works produced in the . Examples of roughly contemporary Insular manuscripts with parallel artistic features to the Lindisfarne Gospels include the Book of Durrow, Book of Kells, Lichfield Gospels, Durham Gospels and Echternach Gospels.

As a treasure book, the Gospels were a costly project requiring considerable resources (quantities of top-quality vellum and costly pigments) and time - 5-10 years of sustained effort. Originally the Gospels would also have included a dazzling treasure binding, but this was lost at some point and replaced with a new binding in the Victorian era.

Based on the evidence – consistency of and uniformity in construction, artwork and palaeographic evidence – the Gospels were created by one artist-scribe, believed to be Eadfrith, sometime in the first quarter of the 8th century. Eadfrith was Bishop of the St. Cuthbert community on from 698-721. The of , also known as Holy Island, is located in and is very convenient to Northern England, and the Continent.

In the political environment of the day, rich monasteries vied with each other for power and prestige. Construction of this treasure-book was driven in part to establish the Cult of St. Cuthbert (d. 687) against the rival Cult of St. Columba (), for strategic reasons of politics, patronage and tourism. However, creating such a book – a very lonely, long-term project – was also a labour of God, an “act of ecclesiastical piety” (Brown).

The Gospels also contain a very valuable, secondary addition – an above-the-lines gloss, or translation, of the Latin text into Anglo Saxon by an Aldred in the 10th century. Aldred’s gloss is the oldest known surviving translation of the Gospels into vulgate, or English. Along with his translation Aldred included a few apparently bastardized verses that name Eadfrith as the book’s creator, adding himself as a contributor.

The artwork represents a “synthesis of art influences across Europe”, including Celtic metal working and stonework – a mix and match of Celtic, Germanic and Pictish stylistic elements of the 6th-8th centuries (Brown, p. 46).

Based on provenances and lists of books available in the area at the time and stylistic comparisons, the creator of the Lindisfarne Gospels was influenced by the internationally sourced library at Wearmouth/Jarrow (Ibid, p. 63). For example, the Latin text of the Gospels “seems to have been copied primarily from one major southern Italian exemplar” (Ibid, p. 299). Books and people travelled then as they do now. The artwork and layout of the Lindisfarne Gospels represents a sophisticated synthesis of the best Insular and Continental Europe could offer in the early 8th century.

·          The Lindisfarne Gospels begin with a cross-carpet page, Jerome’s Novum Opus and Plures Fuisse,  Eusebius’ prefatory and a set of Canon Tables, before the Apostle sections begin.
·          Each Gospel includes a Cross-Carpet page, an Incipit Page, a Portrait Page and body text. The Cross-Carpet and Portrait pages do not necessarily open the Gospel. John’s Gospel is last, as he is the one who received the Gospel direct from God.
·          Cross-carpet page: Each Gospel (Matthew, Mark, Luke or John) opens with a cross-carpet page, absolutely solid with ornament based around a large cross that fills the page.
·          Incipit page: Opening page of the individual Gospel, with a large decorated principal initial, partial page border, and descending initials including the Apostle’s names and the opening words of the text. The hierarchy of initials displays Roman, Greek and Germanic features (Ibid, p. 274).
·          Portrait page for each Apostle
·          Subsequent pages show decorated initials opening specific passages and the remainder of the body text is rendered in half-uncial. Body text is double-spaced. This facilitated Aldred’s Anglo Saxon gloss 200 years later.

The hierarchy of initials functions as an “aid to navigation” (Brown). Sacred services involve various readings at various points in the annual religious cycle. The initial types are functional, not just for beauty’s sake.

Major initials and borders were filled with knotwork, gripping beasts, and coloured pinwheel shapes known as Pelta: a “crescent with a cusped interior curve, derived from the profile of an ancient Greek shield”, a motif from Celtic La Tene art, which originated in the Iron Age and “still enjoyed currency in Celtic Christian Art” (Ibid, p. 273).

These shapes were also painstakingly outlined with up to 8 layers of outlining as follows from the inside out (my observations):

Backdrawing was used throughout. Designs were drawn on the reverse of the page then traced on the right side using a light source (Ibid, p. 290). The marks were then frequently obscured as both pages might have similar designs.

Knotwork:
·          Used as motifs to help fill figures, as termini (danglies) on letters and to help fill border bars
·          When trying to analyze knotwork, one can be stymied by the thickness of the line. The solution is to reduce the knotwork to a thin line and then widen it.
·          Simple knotwork can be created by taking a sine wave and putting a kink in it, then duplicating the image.
·          The actual knotwork effect is created by alternately going over and under the lines.

The Lindisfarne Gospels is a very special book. Its creation required years of lonely toil, its scope sustained by enlightened faith and vision and executed with superlative skill displayed not only in the breathtaking detail of its cross-carpet pages and descending capitals but in the remarkably consistent uncial hand of its calligraphy and the enduring strength and unfading richness of its inks. Despite its complex and even mathematical artistry, it is not chilling or lacking in humanity. The Gospels show a deep desire to make each word and letter a worthy and beautiful vessel for their holy meaning. This yearning is echoed 200 years later by the endearing verses left by the Gospels’ Anglo Saxon translator, Aldred, who succeeded in his desire to add to its legacy as perhaps the most beautiful illuminated manuscript in the world.

All following artwork examples shown are by THL Asa Gormsdottir 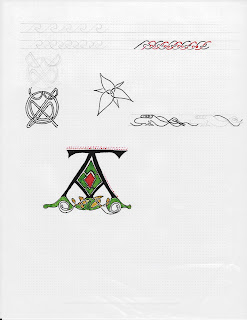 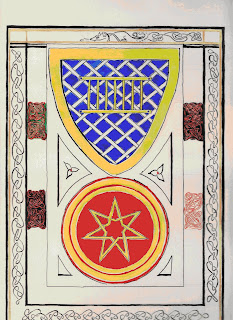 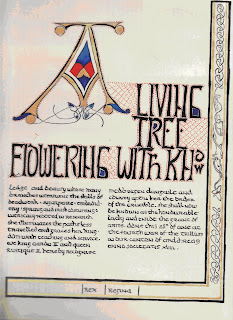